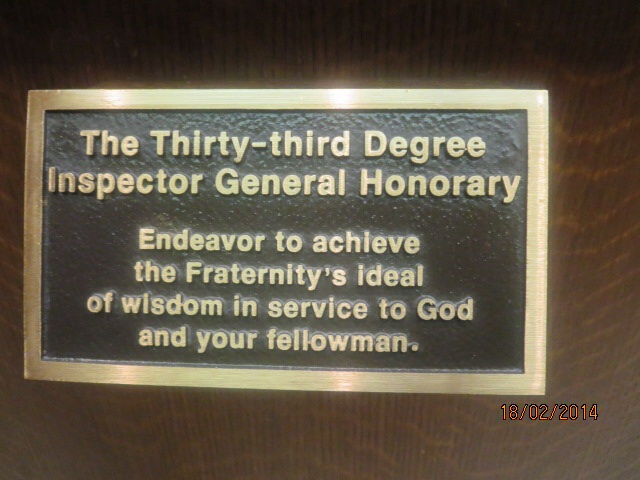 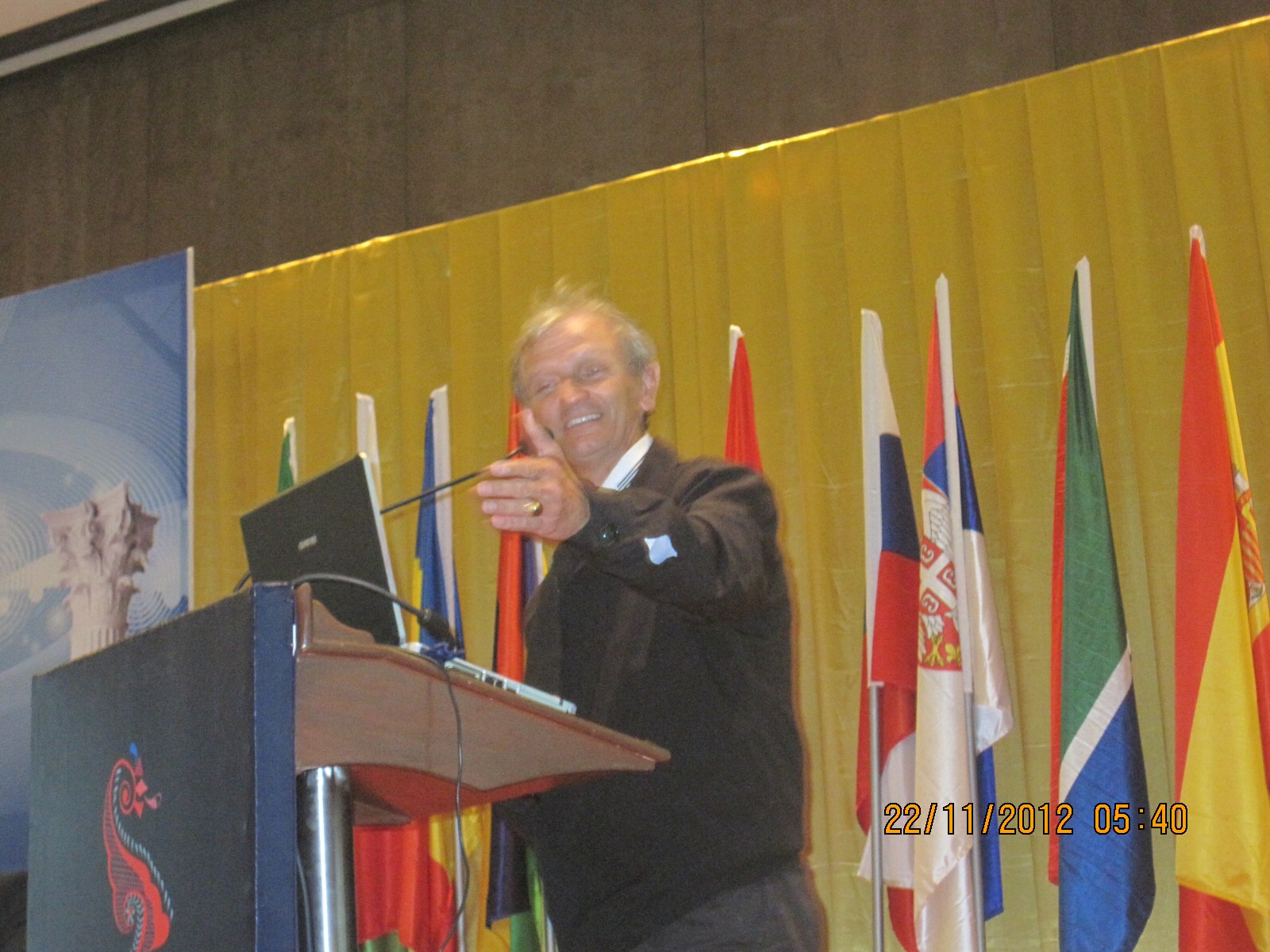 (this a publication from http://masonictimesofindia.blogspot.com.br/2013/01/the-role-of-freemasonry-in-universal.html)

During the meeting in Chennai, India, Freemasons from across the world debated on a very special subject, which is the Role of Freemasonry in Universal Peacekeeping. Attending the event, Brother Marcos HANS presented a view on what role should Freemasonry (as a Craft, generally speaking, and individually as members of Freemasonry) play in universal peacekeeping, starting by quoting Illustrious Albert PIKE, Sovereign Grand Commander: “To many men there is nothing of value or interest in philosophical speculation; as to many men there is no melody in music. There are natural incapacities that diminish the value neither of music or philosophy.”

The in introduction Brother Hans stated that “We live in a time when many individuals and groups from different parts of the world are living in extreme violence and oppression. War seems that has approach too fast in recent decades, and when I mention war, not only wars between nations, for economic, religious or ethnic issues, but war in the hearts, war in the minds. I am not referring to the recent conflicts in Syria, Egypt, Iraq, Afghanistan, but generally in small conflicts between people.  Young people are being raised in conditions far removed from the ideas of peace, harmony and coexistence, and this will undoubtedly impact in the near future when they become adults and eventually leaders.  There are over 4200 (adherents.com)religious groups in the world and among them there are people who refute members of societies different from yours, the stigma about Muslims is an example.”

“We can not deny the creation of so many higher degrees and nevertheless the Craft or Blue Lodges, are not able to attract more good men. We are often very concerned about the hat and forgot to put on good shoes or shine them,” said Brother Hans.

One appreciation in particular was very important. He said that “Our lessons have not been enough to turn good men into better men.” He continued by saying the following: “I fully agree and certainly the vast majority of which are present here, that our case is not quantity but quality. Much has been written and presented on this subject, but I also say, and I think most will agree too, we all want the group to be much larger, more united, practicing their own teachings among the Lodges, Grand Lodges, because out there there are a lot of good men that the system is not able to recruit, and a evidence of this are the few young people in the organization.”

But he also mentioned the exceptions within the Craft, referring at the Grand Lodge of the Philippines, of Ireland and India: “I was surprised by the number of young people and the participation of the family. I participated in Lodges in Ireland where I saw Brothers with 30 years joining a Lodge with an average of 60 years. The same I have seen in New Delhi. In Latin America, especially in Brazil, the membership is increasing with young people. I got news that in the USA this is also happening due to recent events as books and movies. It may be only a curiosity, the time will tell us. However the majority of the world membership is from an older generation than the present.”

Summarizing, “the role and influence of Freemasonry in peacekeeping lies in the power of each Grand Lodge in order to spread the ATTITUDE to implement the Masonic lessons with more passion and pursuing a bigger qualified membership in order to spread the secular teachings of BROTHERLY LOVE, TRUTH AND MUTUAL AID, and one way is to give more attention, financial support to the Paramasonic Orders, such as the DeMolay, for example,” said Marcos Hans.

He also added that “They speak the language of youngest people. They already are in the scene but they will play a more important role from now on. If a Grand Lodge incorporates that team, the probability of success will be much higher. The same is true for the Jobs Daughters, Rainbow Girls, Eastern Star or any other female organization related to Freemasonry, because this involves the women, the family. The family is already so split, that if a fellow goes to a meeting and his family is not involved, they push him away with other activities. And this means a little war.”

Passing to the role of Freemasons as individuals, he pointed the following: “The fundamental is be in peace with yourself. Freemasonry states to make mankind happy. But first, each individual needs to be happy and to be happy one must to be in peace with himself. Not to mention what should be our homework, peace in the lodges, in the Grand Lodges, among the leaders. I mention the recent example of a negative attitude, a very negative example from one of the worldwide Grand Lodges, from France, who suppose to be a leader and a good example. This is a shame and a very black page in recent history of Freemasonry.   We do not have time to be quiet, to be alone, in peace with ourselves, because of our duties and we almost become like robots. The attitude and the aim should be having this time.”

“So, the role of Freemasonry for peacekeeping, is in personal aims, as individual masons, is to pursuit peace of mind, peace in the family, peace in the Lodge, peace in the Grand Lodge, with a vibrant and positive and winner ACTITUDE.”

“Every Grand Lodge has the opportunity and responsibility to implement the lesson from our school better and better involving side orders and in doing so the membership will increase based on the positive reputations it brings.”

“Every single mason has the same responsibility, it means, has more responsibility because he is the image and the core what freemasonry means and stands for .To spread the attitude of a winner, of a peace maker , of a good man, of a better man.”
Marcos Hans
Writer, Speaker, Administrator, Personal and Executive Coach ICI Integrated Coaching Institute.
Commercial real estate developer and a Happy professional tourist.
Past Grand Secretary of Foreign Affairs,Past Master,33,MRA,SEM,Kt.Pr., FRC,Shriner, SRCF VII, TOM.
See curriculum. http://www.sejalider.com.br/?p=4243 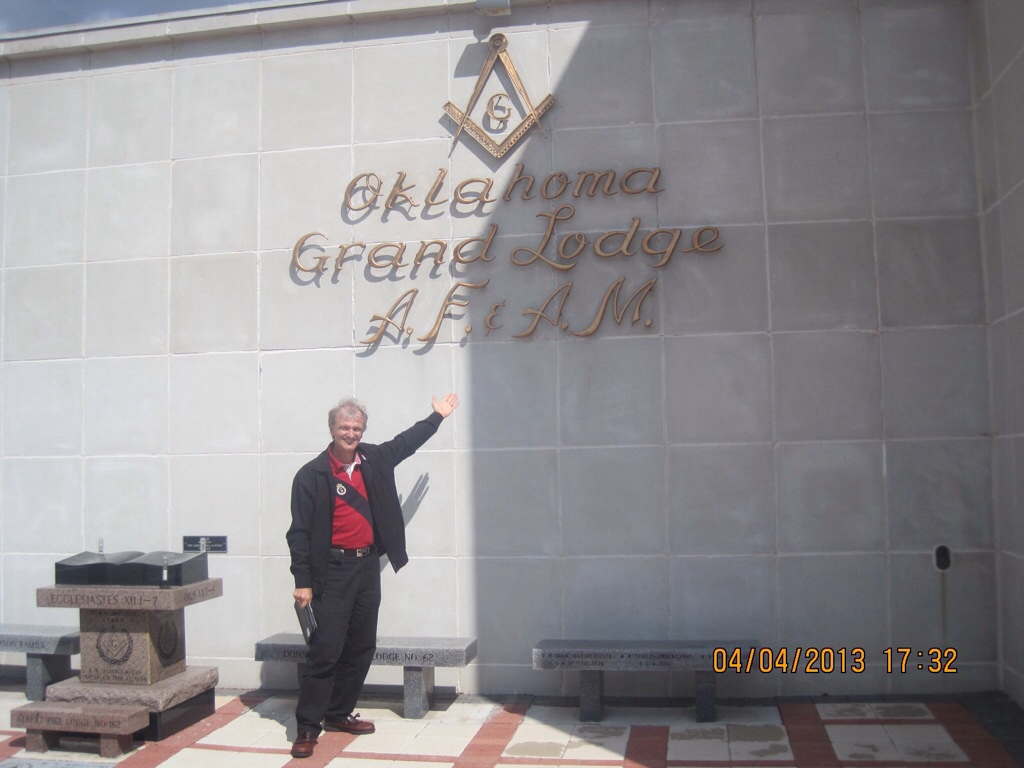 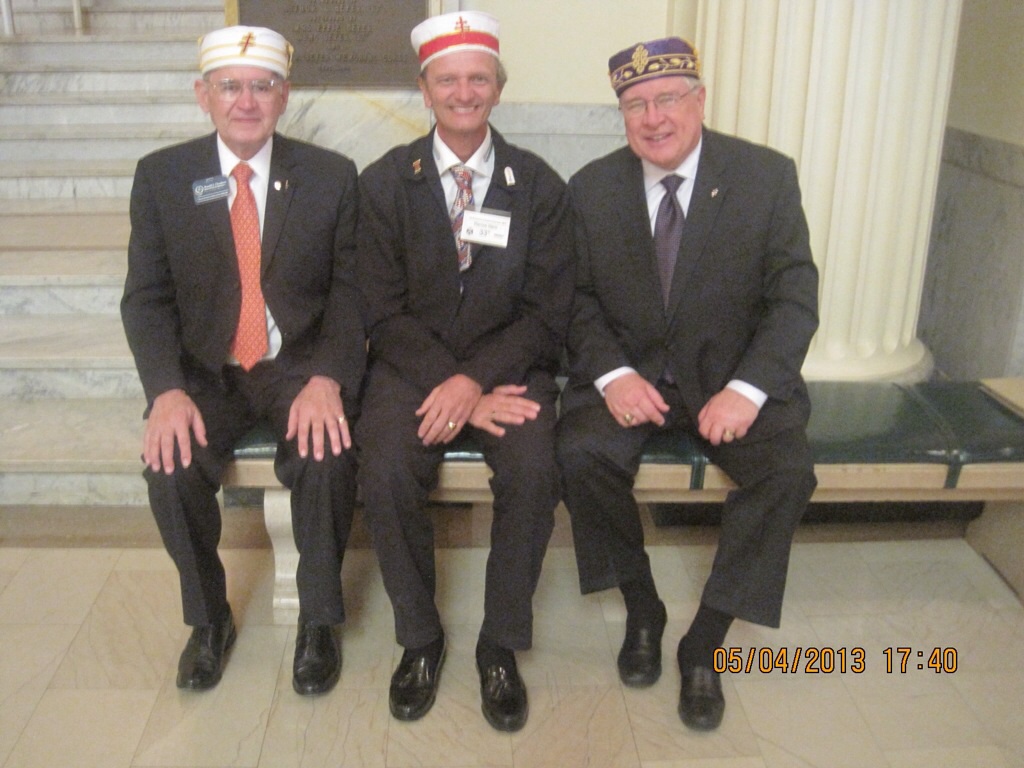 -In Guthrie, 35 miles from Oklahoma City is located the Grand Lodge of Oklahoma ( http://www.gloklahoma.com/) and the famous Guthrie Scottish Rite( http://www.guthriescottishrite.org/).
-My participation on a reunion at the Guthrie Scottish Rite is because once a year they perform all the 29 degrees, from the 4th to the 32th. More than 150 brethren will perform those degrees one after another that is why every team have to be ready with customs and the sayings. New candidates and observers from outside and from many states within the Unites States come to attend and receive the degrees here because the Guthrie Scottish Rite is famous for this annual reunion, and I came to check it out.

-The Grand Lodge of Oklahoma is located just a few blocks from here. The Grand Secretary Bro. Steve Singleton gave me a tour on the building and the museum. The Grand Master Bro. William H. Pearce gave a speech on the opening ceremony at the Guthrie Scottish Rite reunion and gave emphasis  to the inner building that everyone is building, otherwise, this marvelous building that we are in today, will just be another building.
-Besides the degrees , for which this is valley is famous, I found the Academy of Reflection, which was created to encourage the Scottish Rite Masons in the pursuit of inner work such as meditation and silent prayer.
-The new friends, the conversations about the fraternity were the side effects and
I liked it very much to come here and see all the effort that the valley of Guthrie is putting on. The Secretary of the valley, Bro. Bob Davis is a gentleman and makes you feel at home at once. He even send someone to pick e up at the hotel and drive to Guthrie. Thank you to Bro. Frederick Dittmar 33.And  on the way back Bro. Kenneth House KCCH, drove me to the airport. Thank you Bro. House.

– The attitude to visit other bodies, attend conferences, meetings, degrees will help you to understand better yourself and therefore live better and why not longer while here.
Pictures in sky drive-https://skydrive.live.com/redir?resid=73CFA5E8EF2704EC!10155&authkey=!AOonEjfca1IkFQg 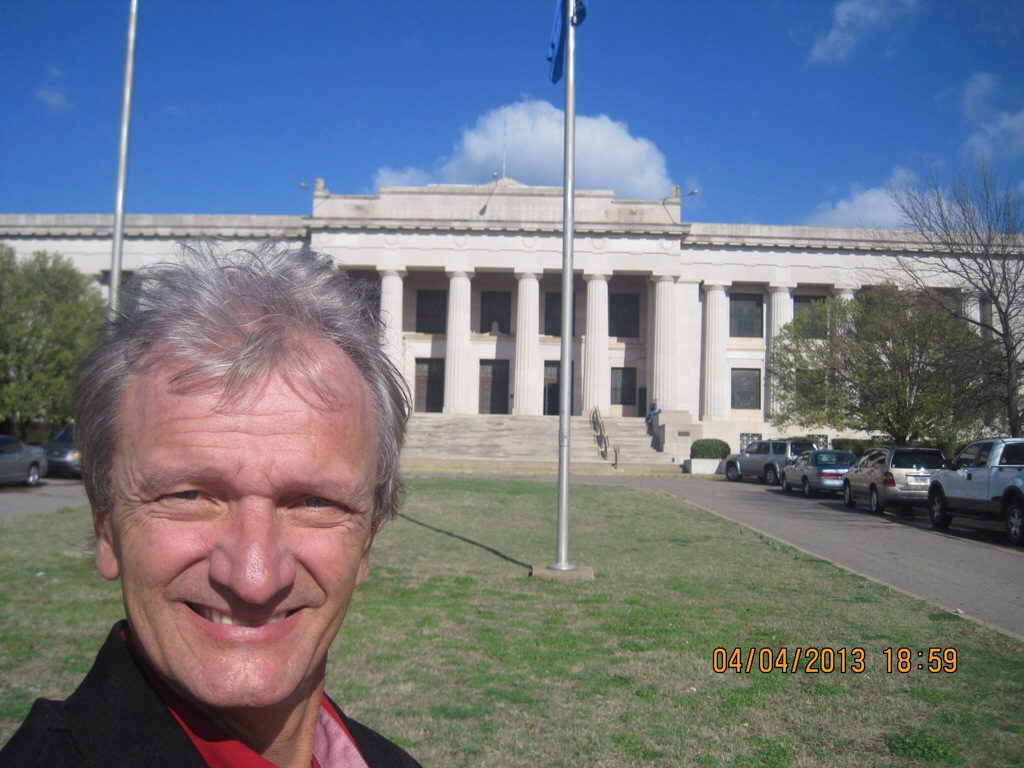 A PROMISE OF NEW HOPE AND EVERLASTING LIFE.

Message delivered at the Tabernacle on Temple Square in Salt Lake City
On March 31, 2013. Easter Sunday

-One cold day, toward the end of a long, snowy winter, a family noticed serious damage to the beautiful ivy that grew on the outside of their home.It seemed that hungry deer had been feeding on it throughout the winter, until nothing but a tangle of brown sticks remained. the tender plants appeared damaged beyond repair. Disappointed, the family determined they would need to pull the ivy out, replant, and star over. for the time being, they tried to forget about the assault to their ivy and saved the somber task for warmer weather. -When spring finally arrived, the family was shocked by what they saw: the broken vines had somehow mended, and tiny buds had appeared. In time, those little buds flourished into beautiful green leaves. today, several springs later, the ivy is robust and continues to spread its leafy sprouts around the home.
-Though it seemed miraculous , the rebirth of the ivy was actually not that unusual. similar miracles happen every year as spring follows winter in an unceasing and marvelous cycle of rejuvenation. It’s an eternal truth reflected in nature- an annual reminder that death is not permanent, Grass that looks dead, brown, and beaten somehow thrives again. Bulbs buried in the dark soil send their shoots toward the light , and flowers triumph afresh. Hope is always part of the landscape.
-Beloved religious leader Gordon B. Hinckley said: ” There is nothing more universal than death, and nothing brighter with hope and faith than the assurance of immortality….What meaning would life have without the reality of immortality?

-When we feel discouraged, when life seems bleak and gloomy, we can remember the One who,declared, ” I am the resurrection, and the life”(John 11:25). On that first Easter morning long ago, the promise of new hope and everlasting life filled an empty tomb:”He is not here: for he is risen, as he said”(Matthew 28:6).